Its still a work in progress, and I’m sure we’ll hit some bumps along the way. It may even fall apart in the process. But it is an open, honest and straightforward effort to listen and follow God’s leadership.

I’ve never been a big fan of the way most churches develop their budget.

There are some notable and extraordinary exceptions, but in many churches the process usually begins with the Budget Committee looking at last year’s budget, comparing it with how much money has been given and what the economic forecast for the coming year looks like. Then they decide upon some number that represents their best estimate of what the members will actually give next year. They close with prayer and ask God to bless their work.

Surely there’s a better way. So this year, we’re trying a different approach.

It begins with a discernment process. All of the teams in the church (all 50 of them) are meeting during these days to pray and listen for God’s answer to the question, “What is God leading our team to be and do?” They’re not discussing money yet. That will come later. But for now, unencumbered by the financial costs involved, they’re trying to discern God’s leadership for their ministry area.

Our Senior Associate Pastor Lynn Turner has come up with some guiding questions for the teams to use in the process.

“God’s Will: nothing less, nothing more”

Framing:  What is God leading us to do in this area of ministry in the coming year?

Exploring and Weighing: Sharing of ideas of those who have been praying… asking the question… ”where does God seem most present in the ideas shared? Where does the Spirit seem to rest?”

Resting: Taking some time to pray about the path ahead.

You can’t enforce a timetable on discerning God’s leadership, but we hope that by the end of the summer all of the teams will begin to sense a direction.

Next, the team leaders and leadership staff will work together to figure out how much it will cost (money, time and people) to accomplish what they feel God is leading them to do.

And then, in mid-September, we’ll have a Saturday morning-long “Ministry Action Plan Summit,” attended by all church team leaders, and the members of the Budget, Finance & Personnel Teams. Each team will have written on a 3×5 card what they’re sensing as God’s direction. The team leaders will have two minutes each to tell the group about it. (Senior Pastor Jim Somerville says he’s going to keep the stopwatch and call time.)

We’ll communicate what the teams are hearing throughout the church, through every possible channel of communication. We’ll challenge our congregation to consecrate ourselves to follow where God leads.

An important piece of the process is one we don’t feel we can implement quite yet. But, God willing, it will be the centerpiece of the Ministry Action Plan development process beginning next year. It is a “Consecration Sunday” when the congregation will have the opportunity to make a commitment of their time, talent, and finances to carry out what God has called us to do in the coming year.

Up until this point, there has been no discussion of the financial aspects of the Ministry Action Plan. But now, with the financial projections that the team leaders have developed and the commitments the congregation made on Consecration Sunday, the Budget Team will meet to develop a three-tier budget for the coming year:

The Deacon Chair, two representatives each from Budget, Finance & Personnel Teams, the Senior Pastor, the seven Associate Pastors, and one representative from each of the eight ministry areas of the church (Invitation, Community, Worship, Formation, Compassion, Communication, Support, & Pastor’s Office) will get together in October. With the Budget Team’s three scenarios in hand, this group will negotiate and develop a recommended set of priorities to meet each of the three scenarios. We fully expect to give-and-take among the ministry areas so that, when the day is done, we will agree on on where God is leading our church in the coming year.

The Budget Team will review, adjust and take final action on the recommendations and then begin a two-month series of presentations and discussions among Deacons and the congregation, allowing more room and time for God’s Spirit to move among us. Perhaps additional adjustments will be made the plans during this period.

Finally, in mid-December, the congregation vote on the plan.

That’s the plan. I’ll tell you how it’s going as we live it out in the coming months. 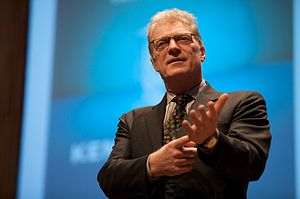 Ken Robinson was the commencement speaker for the VCU Brandcenter graduation last weekend. Robinson has written two books, Out of Our Minds and The Element, and is a well-traveled speaker on the topic of creativity.

He was talking about the importance of taking risks. Robinson concluded his challenge to the graduates by quoting French philosopher and Jesuit priest Pierre Teilhard de Chardin:

“Instead of standing on the shore and proving to ourselves that the ocean cannot carry us, let us venture on its waters just to see.”

Robinson said, “That is the great principle of the creative spirit. You don’t know the outcome, but you have to trust in your own creative impulses to bring about something worthwhile.”

I think those creative impulses are the Spirit of God living within us. If we take time, have patience, and listen carefully to what God is whispering to us through those impulses, we find the full meaning of what Jesus was talking about in John 15:5, “I am the vine; you are the branches. If you abide in me and I in you, you will bear much fruit; apart from me you can do nothing.”

It was one of those situations where TV just can’t capture the experience.

We try to overcome the medium’s limitations. Sometimes we succeed. Other times, we fail miserably. Mother’s Day was one of those other times.

It was a beautiful worship service. Eunice Kim’s piano prelude ushered us into the presence of the Living God. We sang and prayed. We dedicated two babies. The Church Choir and the Youth Girls Ensemble sang beautifully. Dr. Somerville preached an insightful and prophetic sermon. And 15-year-old Sarah Kyle played an oboe solo: Mendelssohn’s “On Wings of Song.”

Sarah said during rehearsal that she was having a hard time hitting one of the notes. But during the 8:30 worship service, she played it almost perfectly.

As she was standing at the side of the platform, ready to move up and play again at the 11:00 worship service, she was horrified when she looked down and saw that her reed was split. She had a spare, but not in the room. No time to change it. So she bravely took her place and started to play. Nothing came out. Just air… and an occasional squeak. The accompanist played on. And Sarah kept trying. As much as she must have been tempted to run off the stage, she stayed with it all the way to the end. She held her composure, showing maturity beyond her age.

From my vantage point in the TV control room, I could see choir members behind her silently rooting for her. Some were obviously praying for her.

When the piece ended, the congregation applauded. It was one of the few times I’ve appreciated applause during a worship service. With their applause, they were not saying, “Good job! Thank you for entertaining us.” The members of this community of faith were showing their love and support for Sarah. And perhaps they were expressing their solidarity with a fellow imperfect human being who was willing to risk embarrassment to be creative in their worship of God.

At the end of the worship service, as is his custom, our pastor, Dr. Jim Somerville, offered a charge and benediction to the congregation. He mentioned that one of our members, Millie Barnes had hit a hole-in-one at the church golf tournament the day before. And then he said, “I’m guessing there are lots of times that Millie swung her club and the ball didn’t go in the hole.  But that’s how it is with golf.  Sometimes it works, and sometimes it doesn’t.

“I was thinking about Sarah Kyle who got up to play the oboe today…  And I was thinking about how heart-breaking it must have been for her to stand there and struggle to make music when all she got was squeaks and breath.  But I also know that I was here in the 8:30 service when she played beautifully.  This is how it is with playing oboe.  Sometimes it works, sometimes it doesn’t.  And any of you who have tried playing Mendelsohn on the oboe in front of hundreds of people know exactly what I’m talking about.

“I remember that Olympic diver Greg Louganis used to say that when he stood on the end of the diving platform, he would always say, ‘even if I blow this dive, my mother will still love me.’  It’s what made it possible for him to take risks and to try things other people were afraid to try.

“I’d love to think that this congregation would be that kind of safety net for people who are bold enough to take some risks. So that if a young woman stood up to play the oboe and she began to fall, we would catch her with our love. That she would know this is a safe place to try and fail and get up and try again.

“I’d like to think this would be the kind of congregation where everyone would feel free to take some risks. To live their life in a more open and fearless way than ever before because they knew the safety net was there. And that if they fell, somebody would be around to catch them. Maybe that could be our charge in this week. To be those kind of people, to catch the ones who fall, to pick them up, to set them on their feet again, and to tell them, ‘listen, no matter what, we will still love you.’”

I’m not sure we handled this well in the television broadcast of the worship service.

We brought Sarah into the studio after the worship service and got her to overdub the oboe part while watching the video and listening to the piano accompaniment. And that’s the version you’ll see if you watch it on TV this Sunday. We edited out Jim’s comments at the end. Someone watching the TV program wouldn’t have any idea of what really happened in the sanctuary that morning.

I’m thinking that, for the sake of a more polished TV program, we sacrificed the “teachable moment” that God had provided. Sarah’s oboe solo… the congregation’s spontaneous show of support… Jim’s using it as an illustration of what it means to be a community of faith… that was the real sermon Sunday morning.

With Sarah’s and Jim’s permission, here it is – unedited. Be sure to watch all the way to the end, to see how the congregation responds to the pastor’s comments at the end of the service. 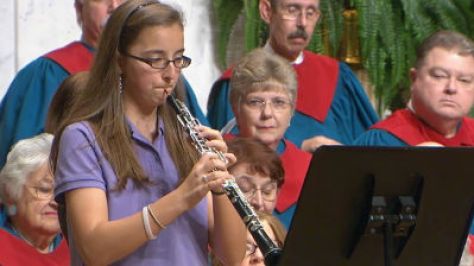