It’s that most wonderful time of the year: The week following “Christ the King Sunday” and “The First Sunday of Advent” on the liturgical calendar. And it is the time of year when many churches are putting the finishing touches on next year’s budget. 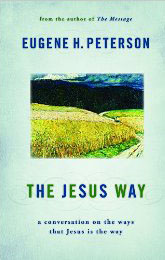 It is at just this time of year that a passage from Eugene Peterson’s book The Jesus Way, comes to mind. I often think of it when I hear someone say, “We’ve got to run this church like a business!”

More often than not I find my Christian brothers and sisters uncritically embracing the ways and means practiced by the high-profile men and women who lead large corporations, congregations, nations, and causes, people who show us how to make money, win wars, manage people, sell products, manipulate emotions, and who then write books or give lectures telling us how we can do what they are doing. But these ways and means more often than not violate the ways of Jesus. North American Christians are conspicuous for going along with whatever the culture decides is charismatic, successful, influential – whatever gets things done, whatever can gather a crowd of followers – hardly noticing that these ways and means are at odds with the clearly marked way that Jesus walked and called us to follow. (p. 8)

Peterson goes on to say,

The ways and means promoted and practiced in the world are a systematic attempt to substitute human sovereignty for God’s rule. The world as such has no interest in following the crucified King. Not that there isn’t plenty of lip service offered along the way across a spectrum ranging from presidents to pastors. But when it comes down to an actual way of life, most of the language turns out to be court protocol – nothing to do with the way we actually order our affairs. (p. 9)

Peterson’s observations ring true in many areas of our personal and ecclesiastical lives. But they seem to hit the bulls-eye when in comes to how churches develop their budgets.

There is a better way to do it. I outlined it in a previous post.

It is a new path for our congregation (Richmond’s First Baptist Church) and it hasn’t worked exactly as planned. There’s been plenty of angst along the way. But it has been a good start, mainly because we started at the right place: attempting to discern God’s direction for our congregation rather than analyzing the economic forecasts, the historical giving patterns, and the best guesses about what the people will give next year. Granted, there’s been plenty of analyzing and guessing. But we didn’t start there. And that’s an important distinction.

One of the highlights of the budget process was the “Ministry Action Plan Summit.” Our pastor blogged about it.

We learned some things about the sequence of events and meetings… things that will make the process much more effective next year. If you’re interested in the details, send me an email and I’ll fill you in.

My experience over the last 40 years in church leadership roles has taught me that it is difficult, and it requires a conscious effort to listen carefully and sense the gentle nudges with which God leads us, while trying to be a faithful steward of the resources He has provided. That’s the challenge Budget Committees face every year when they tackle their assignment.

But the job is not just about dollars and cents. It is about, as Eugene Peterson puts it, “develop(ing) awareness and facility in the ways of Jesus as we go about our daily lives following Jesus in home and workplace, neighborhood and congregation, so that our following is consonant with his leading.” (p. 10)

Peterson quotes are from his book, The Jesus Way – A Conversation on the Ways that Jesus is the Way. (© 2007 Eugene Peterson. William B. Eerdmans Publishing Company, Grand Rapids, Michigan.) Why does the church need to be involved in producing movies? I hear that question often… especially when we talk about how much it is going to cost to produce “The Prodigal Project.” (read more about that…)

“Doesn’t Hollywood already do a good job of it? And aren’t there other churches producing Christian films?”

The most obvious answer is that we have a story to tell – the story of God loving us so much that he came to live among us, showing us how to truly live. It is the story about God searching for the lost… and throwing a party when we’re found! If it isn’t the church’s job to tell that story, then whose job is it?

Unfortunately, most of the Christian films produced by churches speak primarily to a Christian audience. They tell powerful stories filled with the Gospel, but they’re done in such a way that “secular” folks will never see them.

Another answer to the question, “Why are we doing this?” appeared in a recent blog post by John Stonestreet.

He reminded his readers of the famous quote by Scottish politician Andrew Fletcher, “Let me write the songs of a nation, and I don’t care who writes its laws.”

So let’s embody God’s unconditional love, forgiveness, and opportunity for second chances. And let’s tell compelling stories which reveal that truth. Let’s pour our energy and resources into capturing imaginations… Like Jesus did when he talked about wedding banquets… and travelers mugged on the side of the road… and farmers sowing seed… and fathers welcoming home lost sons.

When talking about how he came to faith in Jesus, Metaxas said,

And, speaking to the gathering of our nation’s leaders, known more for bickering and name-calling than for demonstrating God’s love, he boldly proclaimed…

If you can see Jesus in your enemy, then you can know that you are seeing with God’s eyes and not your own. So can you love your enemy? If you cannot pray for those on the other side, if you cannot actually feel the love of God for your enemies, political and otherwise, my friends that’s a sure sign that you are being merely religious, that you have bought into a moral system, but you do not know the God who has forgiven you. Only God can give us that supernatural, agape love for those with whom we disagree.

(Eric Metaxas is the author of two biographies, Amazing Grace: William Wilberforce and the Heroic Campaign to End Slavery and Bonhoeffer: Pastor, Martyr, Prophet, Spy. Check out his website.)