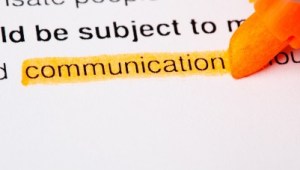 The future of communication in the church is all about storytelling, not technology.

That’s what I’m telling the folks who are looking ahead and thinking about the Ministry of Communication at Richmond’s First Baptist Church. They’re laying the groundwork for what kind of person they want to lead the ministry after I retire in September.

When I first joined the FBC staff in 1993, my job title was Media Minister. The focus of my work was using the various media at our disposal: television, printed newsletters & brochures, and public announcements. There was no website, no digital signage, and no online magazine.  If we wanted to get the word out to the community about something, we notified the radio & TV stations and the daily newspaper. There were no online community calendars, no social media such as Facebook, Twitter and Linked In. 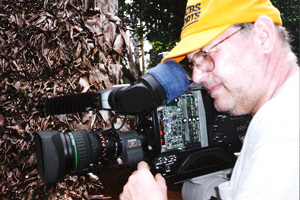 I used to jokingly tell people that I was the “Minister of Machines.” That was not far from the truth. Fortunately, I didn’t have to run a full-blown print shop, as I had done in a previous church. We farmed out the printing, and it cost a small fortune. But I did spend a lot of time keeping the television equipment running. There were dedicated boxes all along the signal path, each one performing some specialized function. There were tape machines and big, heavy, energy-hungry, heat-producing video monitors everywhere.

A television engineer friend used to quip, “Television is so complex, with so many interrelated connections and finicky sub-systems, that when every little piece works perfectly, the whole system just barely works.” When I started in television in the late 60’s, it took an army of technicians to keep all those little pieces working and playing well together. I had a full head of hair back then! 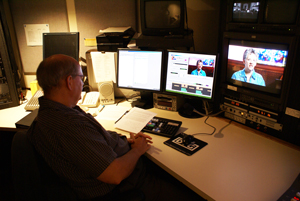 I still spend a lot of time wrangling technology and scratching my bald head when something doesn’t work. But these days, there are no tape machines. Everything’s recorded in 1’s and 0’s on hard drives. The cathode ray tubes are gone and sleek, thin LED monitors sit in their place.

The lone computer in the FBC TV control room when I arrived 20 years ago has been replaced many times over with ever-more-sophisticated and powerful processors. Most of those specialized black boxes are gone. There are half dozen more computers. They allow us to create visual and audio effects that only high-end Hollywood studios could do just a few years ago.

These days I’m the “Associate Pastor, Communication.” And I focus more on who, what, when, where, why, and how, than on the hardware used to carry the message. 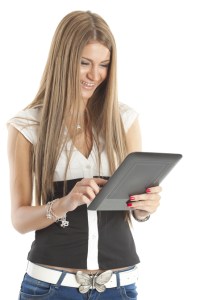 It’s all about telling stories and connecting with people.

One size does not fit all. Truth be told, it never did.

There are so many communication channels, so much “noise” and competition for our attention, the biggest challenge is discovering and tracking how and where people get their information and what factors exert influence as they make decisions.

We deal in spiritual matters. So results are rarely quantifiable using simple math. You can’t count heads in the sanctuary on Sunday morning and get an accurate measure of spiritual maturity.  You can’t gauge the effectiveness of our efforts to communicate the Gospel by adding up what’s dropped in the offering plate. The measure of success, I’ve been learning, is in the stories of life change… of transformation. Telling and listening to those stories is the “stuff” of the church’s communication ministry.

So here’s to the storytellers of the next generation. And don’t count me out of the game quite yet, either. I’ve still got a few yarns to spin.

It is impossible to capture in one brief blog post the true spirit of the day… the full range of tones and harmonies in that symphony of creative energy. But here are a few gleanings… some of my takeaways. (I’m putting quotes around the phrases even though they are not the exact words used by the speaker.)

From Brian Andreas, artist, writer and entrepreneur behind the internationally known boutique art and book publisher, StoryPeople: “If you are alive, you are creative… If you want to be more creative, do things that make you feel more alive.”

From Sheryl Connelly, futurist with Ford Motor Company: “I love my job, but I don’t always enjoy the work. But if it wasn’t hard you would be a volunteer. That’s why they pay you to do it.”

From designer Deborah Adler, “Don’t create for the world, create for a person.” 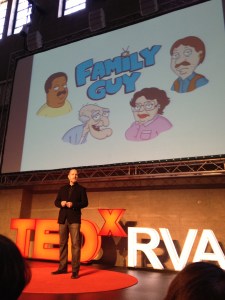 From Richmond native Mike Henry, who gives voice to some of the quirky characters on “The Family Guy”: “Stay with your dream. Don’t let go. Don’t give up.”

From Katherine Wintsch, founder of The Mom Complex: “Don’t buy into the image of yourself that others try to project on you. Be honest. Face your fears. Then, and only then, will you discover the truth.”

From Zoe Romano, the young Richmond woman who ran across the United States: “Uncertainty and vulnerability are crucial to the creative process.”

And from Derek Sivers (via a TED video): “The first follower turns a lone nut into a leader.” (You really have to see the video to get the full impact of that truth.)

There was so much more… 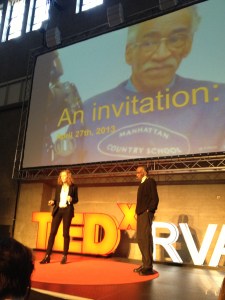 – from designer Cheryl Heller, who transformed her TEDxRVA speaking gig into a partnership with Boaz & Ruth, a Richmond non-profit, faith-based initiative that helps people help themselves;

– from author Kevin Carroll, who modeled the truth that work and play are not opposites;

– and from Fox Elementary School art teacher Julie Crowder who stands as a shining example of the power of passion when she inspired a city-wide outpouring of hometown love with her project, “RVA Valentines: Love Letters to Our City.”

More than 30 speakers/artists/musicians challenged and inspired us during the daylong event. The inaugural TEDxRVA event will no doubt fuel my life and my creativity for the foreseeable future. 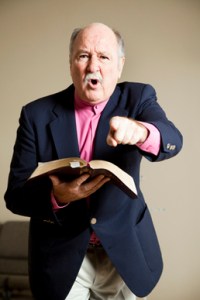 A young Jewish film student from the Bronx walks into a bar with a Southern Baptist preacher, a Goth 7-Eleven clerk, and a gay vintage clothing storeowner.

Actually, those are some of the characters and one of the locations in the screenplay I’ve been writing for the last three months, along with my writing partner Deborah Hocutt.

When those characters inhabit your brain for that long, you have the makings of a serious mental illness. I’m beginning to understand why so many writers have quirky, borderline schizophrenic personalities. 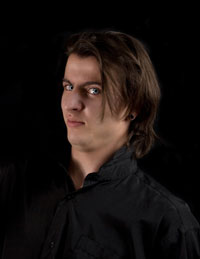 And for those who’ve lost sleep worrying why I haven’t posted on my blog in the last three months, you have your answer.

The script for “Shooting the Prodigal Son” is getting close.
If all goes well, we will complete this draft by Easter.
Soon afterward, we’ll find out if enough people will consider it screen worthy enough to support it with their money. If so, we’ll move into preproduction. Perhaps we’ll be ready to begin principal photography late this summer.

It has been a long, winding road, starting in January 2010. The writing team got down to serious work in February 2012. This is the third major rewrite. 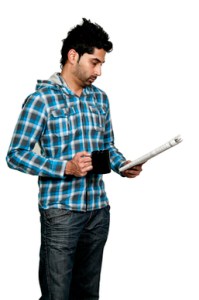 I’m feeling pretty good about this one. Although I must admit, I felt the same way about the previous two. So my optimism is guarded and nervous. But optimistic still.

Even if this project never gets off the ground, I am a richer person for having spent the last three years immersed in Jesus’ parable of the lost son. There are so many spiritual gems to be discovered, we could mine it for another 2,000 years and still find wonder and inspiration in this simple story. It is, I believe, the essence of the Gospel.

We’ve set out to interpret it for our culture in a fresh, relevant and entertaining way. Over the coming weeks and months we’ll find out if we succeeded. Pray for us.

In the meantime, I’ll return to a more frequent blog post schedule. There are so many exciting things going on. Among them are next Friday’s TEDxRVA event, in which I will participate. Can’t wait to tell you about it.