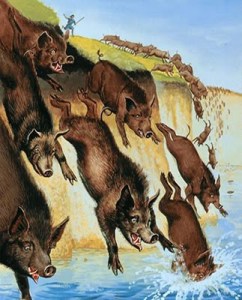 There’s a story in the Gospel of Mark (chapter 5) about Jesus healing a man who was possessed by a legion on demons.

He was so bad off that he lived out in a cemetery. He must have been dangerous. The town’s folks tried to restrain him with chains, but he broke free. Mark says, “He was always howling and bruising himself with stones.”

When Jesus encountered him, the demons who possessed the man begged Jesus not to destroy them, but rather send them into a herd of pigs nearby. When the demons entered the pigs, the whole herd “rushed down the steep bank into the sea, and were drowned.”

The swineherds ran off and told the townsfolk what happened and they all ran out to see for themselves.

As Mark tells it, “They came to Jesus and saw the demoniac sitting there, clothed and in his right mind… and they were afraid… Then they began to beg Jesus to leave their neighborhood” (Mark 5:15-17).

Amazing! Jesus has just miraculously healed a demon-possessed man who posed such a treat to the town that the residents tried to keep him chained up. And how do the townsfolk respond? They’re afraid… and they’re upset about the pigs!

Now, I don’t have anything against pigs. And I’m sure the economic impact of the lost herd was huge. But the significance of what happened – God stepping in to instantly and miraculously heal a hopelessly-possessed man  – seems to have been lost on the townsfolk who couldn’t see past the swine.

When God is at work, focus on the miracle… not the pigs.