Dr. Theodore F. Adams  was the legendary pastor of Richmond’s First Baptist Church from 1936 to 1968, and president of the Baptist World Alliance from 1955 to 1960. He was on the cover of Time Magazine December 5, 1955. Almost 50 years after leaving the First Baptist pulpit, he is still revered.

The 1950’s were a booming era for churches. And those churches that also had a gifted pastor like Ted Adams were busting at the seams. I’ve heard some of the old-timers recall that all you had to do was open the doors and get out of the way. The pews were filled every Sunday.

A lot of churches that boomed in the 50’s are struggling to survive these days. With dwindling congregations, aging buildings and an unhealthy measure of nostalgia, they’re trying to figure out how to bring back “the good old days.” They point to the mega churches, the embodiment of American success and wonder, “why can’t we be like that?”

That’s the situation for the fictional Eternal Hope Baptist Church of Homer, Alabama in our film SHOOTING THE PRODIGAL. They remember the good old days when the church’s founder, Brother Big Bob Cross presided over a thriving enterprise. But these days, there are lots of questions and few answers: How do we keep the young folks engaged? How are we going to keep the church doors open? And, of course, “What would Brother Big Bob do?” END_OF_DOCUMENT_TOKEN_TO_BE_REPLACED

I had been reading the fifth chapter of Mark’s gospel.

Jesus is on his way from a boat landing into town when a man possessed by a legion of demons interrupts him . Jesus stops and heals him.

Next, Jesus is telling stories to a crowd of people when a man named Jairus interrupts and begs Jesus to come and heal his sick daughter. Jesus stops what he’s doing and heads toward Jairus’ house.

On his way, a woman who had been ill 12 years comes up behind Jesus and touches his cloak in hopes of being healed. Again, Jesus stops and deals with the interruption. He says, “Daughter, your faith has healed you. Go in peace and be freed from your suffering.”

A light bulb came on in my head. I realized that a lot of good stuff happens on the way to doing something else. And if I’m too busy to stop and deal with the interruptions, I might just miss what God’s trying to do with me and through me.

And then I recognized how much I’d been immersed in these stories from Mark’s gospel. Jesus used storytelling as his primary method of teaching. Perhaps I should do the same.

As a church communication guy, I spent a lot of time and energy  relaying information about programs and ministries, calendars and events. Now I began to see that telling a story is much more effective than reciting facts, dates and bullet-points… especially in spiritual matters.

I began refocusing my work. My new passion was telling stories and helping others tell their stories. On the church website, in the weekly TV program, and in every other channel of communication, we began to feature the stories of how people were living out their faith in their day-to-day lives.

You can see the first 50 or so of them here. And still more here.

As a congregation, Richmond’s First Baptist Church was on the way to something else. Ten months earlier, Dr. Peter James Flamming retired after serving 23 years as Senior Pastor. The Pastor Search Committee was still interviewing candidates for his successor.

We were dealing with an abnormal level of angst and anxiety in the congregation. I don’t claim that the stories changed all that. But I was an eye-witness to softening hearts as people recounted their experiences with God. And many of those who heard, read and watched the video clips melted into God’s grace as they resonated with those stories… many of which involved dealing with some sort of interruption.

As Mark tells it, the folks who were around when Jesus healed the demon-possessed man were more concerned with the pigs than the miracle (I talked about that in a previous post).

But the healed man went around that part of the country telling the story of what Jesus did for him. And Mark says, “All the people were amazed.”

Staff meetings at Richmond’s First Baptist Church take place at 9:30 Tuesday mornings. Never having been a big fan of them, I decided the best way to spend my first Tuesday morning of retirement was by taking a long hike. So this morning, rather than sitting at a big table in a windowless room, I enjoyed the scenery along the James River. 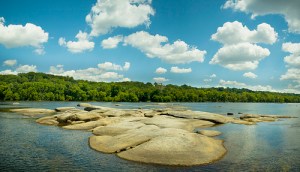 As I began my hike, I prayed thanksgiving to God for His immeasurable blessings: for the beautiful world He created, for good health to be able to enjoy this morning’s activity, for the extraordinary 46 years I’d been able to ply my trade in broadcasting and communication, the 33+ years I was able to serve in His church… the last 20 of them at FBC Richmond, and for the promise and challenges that are ahead as we launch Belltower Pictures and produce our first feature film.

Then I began to think about my friends and former colleagues sitting around the staff meeting table at that very hour. And the feeling that swept through my mind was not at all what I expected.

I had eagerly anticipated this moment: a Tuesday morning when I would be out in God’s creation, breathing the fresh air, and grinning with relief because I wasn’t sitting in a meeting. But the emotion I felt instead was deep gratitude for those folks with whom I’d shared so much of my life for the last 20 years. And just a touch of sadness that I would no longer be a part of that family.

If I could have immediately transported from the trail to the conference room, I would have done so… but just for a moment. Long enough to encourage my dear friends to cherish every minute of their time at that table. Because those precious times cannot be re-lived.

As I returned my focus to the trail and my long-anticipated hike, I once again gave thanks to God for the opportunities He’d provided me in the past. My pace quickened as I thought about all that is to come… a new chapter and an exciting new adventure.

And I thought of what Dr. Seuss once said…

“Don’t cry because it’s over. Smile because it happened.”